Between Hatred and Nostalgia: Creating a new vision of Polish Jewry in the Third Polish Republic (1995–2005) 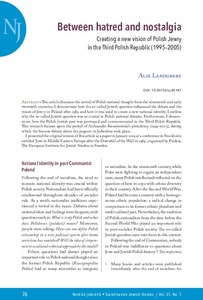 This article discusses the revival of Polish national thought from the nineteenth and early twentieth centuries. I demonstrate how the so-called Jewish question influenced the debate and the vision of Jewry in Poland after 1989 and how it was used to create a new national identity. I outline why the so-called Jewish question was so crucial in Polish national debates. Furthermore, I demon- strate how the Polish Jewish past was portrayed and commemorated in the Third Polish Republic. This research focuses upon the period of Aleksander Kwasniewski’s presidency (1995–2005), during which the famous debate about the pogrom in Jedwabne took place.

The original version of this article was presented as a paper in January 2019 at a conference in Stockholm entitled ‘Jews in Middle Eastern Europe after the Downfall of the Wall in 1989’, organised by Paideia, The European Institute for Jewish Studies in Sweden.