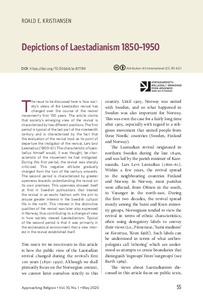 The issue to be discussed here is how society’s views of the Laestadian revival has changed over the course of the revival movement’s first 100 years. The article claims that society’s emerging view of the revival is characterized by two different positions. The first period is typical of the last part of the nineteenth century and is characterized by the fact that the evaluation of the revival took as its point of departure the instigator of the revival, Lars Levi Laestadius (1800–61). The characteristic of Laestadius himself would, it was thought, be characteristic of the movement he had instigated. During this first period, the revival was sharply criticized. This negative attitude gradually changed from the turn of the century onwards. The second period is characterized by greater openness towards understanding the revival on its own premises. This openness showed itself at first in Swedish publications that treated the revival in an exotic fashion with the aim to arouse greater interest in the Swedish cultural life in the north. This interest in the distinctive qualities of the revival was later also expressed in Norway, thus contributing to a change of view in how society viewed Laestadianism. Typical of the second period is that it was primarily in the ecclesiastical environment that a new interest in the revival established itself.