EXTRATERRITORIAL RESPONSIBILITY TO PROTECT CIVILIANS IN A SITUATION OF ARMED CONFLICT – CONCEPTS, JURISDICTION AND APPLICABILITY 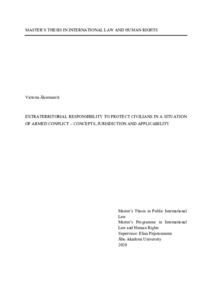 The legal foundation for extraterritorial responsibility to protect civilians in a situation of armed conflict, lies first and foremost in the hands of the national state and where the national state fails to protect, the international community is to intervene and assist in providing protection for civilians. Through international human rights treaties, states have a constant obligation to protect. This obligation to protect includes extraterritorial protection, as states have an obligation to respect and secure human rights at all times, which has been interpreted to comply also to situations of extraterritoriality. Consequently, when a state is in a position of effective control over an area, that state has human rights obligations towards the civilian population in that specific area, be it nationals or non-nationals.