Secession and the Territorial Integrity of States 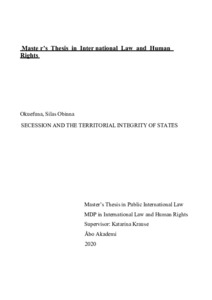 Emergence of new States usually is preceded by conflicts. The quest to establish less violent ways of solving territorial and or secessionist disputes led to this research, which examined the concept of secession, whether there is a right to secession under international law in light of the principle of territorial integrity of States. Towards answering the research question, the research explored concepts like self-determination, remedial secession, unilateral secession, and effects of membership or non-membership of the United Nations by an independent nation. The research aimed to establish the scope and extent of the right to self-determination under international law, and the remedies available to an oppressed minority group in a State if they chose to secede from the parent State as a result of the oppression. Topical active secessionist movements, especially in Africa and Europe were used as instances to highlight the different aspects of the right to self-determination and how Parent States react in the face of apparent or imminent assault on the territorial integrity of the respective States, with the Scottish scenario serving as a contemporary comparative model from which other secessionist agitations and States responses were viewed. The research was done using doctrinal research method which was based on the exposition, analysis, and critique of legal prepositions and doctrines as contained in legal texts and judicial decisions.
The research showed that although there is an already established State practice which favours preservation of the territorial integrity of States, (unilateral) secession however, was not prohibited under international law, and new States are emerging as a result of secession. There is a right to external self-determination for all colonised and oppressed people, subject, in Africa, to certain limitations imposed by a case law. Finally, the research underscored the importance of the concept of remedial secession in issues related to oppressed minority population, and the fact that although an oppressed minority population can claim a right to remedial secession, secession itself, is more of a political than legal recourse, and any attempt to unilaterally secede without much international support may be an exercise in futility given the military might and coercive powers of a Parent State.