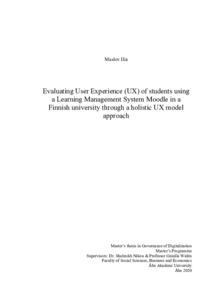 Literature suggests that e-learning has growing importance for higher education. Learning Management System (LMS) is an integral part of the facilitation of the e-learning process. Hence, students’ User Experience (UX) of LMS is essential in learning at higher education. However, existing research literature into UX of LMS mostly relies on quantitative surveys based on reductionist technology acceptance models. Contemporary research covers the research gap by employing a holistic UX model in a qualitative-driven mixed methods approach. Semi-structured interviewing of 20 students at Åbo Akademi University was conducted, where Moodle is used as an LMS. As a result, UX of Moodle may be characterized as an efficient study-related tool, which lacks entertainment and communication facilitation. Other web-platforms (such as e-mail, WhatsApp, or YouTube) were found to affect the UX of Moodle by replacing, compensating or complimenting some features of Moodle. Data suggests that the context of use and how teachers use Moodle are highly detrimental to the students’ UX. Four groups of students were established, whose UX ranged from good to somewhat bad. Most of the students had UX that is between somewhat good and acceptable. Solutions were proposed to the identified issues in the UX based on the students’ feedback. Additionally, the research attempts to find whether gender differences exist in the UX of Moodle. Data suggest that there are no significant differences. Still, there may be slim differences in certain aspects, with women focusing slightly more on a holistic use of Moodle, including how it is used by others and how it looks, whereas men were focusing slightly more on the ability of LMS to facilitate the performance of tasks, such as learning. Additionally, women were more variant in evaluating UX than men. Finally, an employed holistic UX model is evaluated for its applicability to explore UX of an LMS. It was found that the holistic UX model allows for exploring a UX, but quite broadly. As such, a new conceptual model of UX of an LMS was developed, which may potentially help to focus on analyzing specific elements of an LMS’s UX. The results of the research are compared with findings from the literature. Ideas for further research are also suggested.