Inclusive Dreams and Excluded Realities : An Analysis and Critique of 'Xenophobic' Rhetoric, and Practices of Exclusion in the South African 'Rainbow Nation' 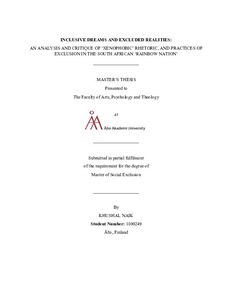 The South African ‘Rainbow Nation’ was an ideology born of the end of Apartheid in 1994 by Desmond Tutu and Nelson Mandela, and used to refer to the dreams and subsequent trajectory of national development of South Africa through the principles of inclusion for all and Ubuntu; and developed through the idea of an African Renaissance. However, as represented by three waves of anti-foreigner violence in 2008, 2015, and 2019, the inclusive dreams of the ‘Rainbow Nation’ seem a distant memory as practices of exclusion present themselves with frequency in the post-Apartheid state. The sentiment evident from analyses of the three waves of violence point to a fear and hostility towards foreigners in South Africa, and have thus been termed ‘xenophobia’ by scholars and media; and have been used consequently in all forms of discourse relating to the violence.

However, in further analyses of the causes of the violence, what becomes apparent is the complexity of causality that manifest within the three spheres of the social, economic, and political, that exist in the nation. These thus point to there being broader explanations for anti-foreigner violence than simply being a fear or hostility towards foreigners, borne out of rampant mentalities of exceptionalism by the general population and reinforced through immigration policy. Paying attention to the unique context and historical development of South Africa since 1994, this research will argue that the term “xenophobia” remains too simplistic in its encapsulation of the violence, and that rhetoric surrounding anti-foreigner movements and waves of violence must therefore be understood vis-à-vis the broader structure of the nation itself - along the three spheres of the social, economic, and political that shape sentiment and ultimately result in waves of violence via holistic causality.