Coastal Habitats and their Importance for the Biodiversity of Faunal Communities 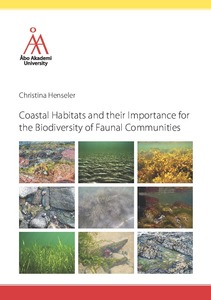 Henseler, Christina
Åbo Akademi - Åbo Akademi University
This publication is copyrighted. You may download, display and print it for Your own personal use. Commercial use is prohibited.
Näytä kaikki kuvailutiedot
Julkaisun pysyvä osoite on
https://urn.fi/URN:ISBN:978-952-12-3950-2

Coastal habitats represent highly productive areas serving important functions for multiple organism groups. These shallow areas generally maintain high faunal biodiversity, providing important ecosystem goods and services, and are currently threatened by various environmental and anthropogenic stressors, including climate change and eutrophication. Therefore, it is essential to assess the link between coastal habitats and community biodiversity, thereby getting a better understanding of their significance for ecosystem functioning.
This thesis explores the importance of coastal habitats for faunal biodiversity and examines how biological interactions contribute to structuring biodiversity among these habitats. The four studies included in this thesis focus on fish and invertebrate communities in the Baltic Sea, and biodiversity is assessed by means of taxonomic and trait-based approaches. Studied habitats comprise rocky reefs, bladderwrack belts, bare sand areas, seagrass meadows and macrophyte beds. Community biodiversity and structure among habitats were explored by field studies, whereas biological interactions within the same organism group were examined through laboratory experiments. Field experiments were conducted to investigate the impact of a nonnative fish species on the diversity of native invertebrate communities.
The findings highlight that biodiversity of benthic macroinvertebrate and fish communities is distributed heterogeneously among several coastal habitats, which possess distinct community compositions. The sediments of seagrass meadows had the highest invertebrate diversity, while bare sand areas supported the highest fish diversity from a taxonomic and trait-based point of view. Invertebrate community composition differed between vegetated and non-vegetated habitats and sediments, indicating that habitat complexity plays an important role in structuring communities. The biological trait approach was found to provide essential information on the biodiversity of communities, such as the existence of dominant traits in a habitat, which is why a combination of taxonomic and trait-based approaches in the assessment of biodiversity is suggested. This thesis shows that the observed biodiversity across coastal habitats is influenced by biological interactions between organisms. Predation risk and competition affected the habitat use of a common Baltic Sea fish species, perch, which adapted its habitat use to the presence of a predator and competitor fish species, respectively, by increasingly occupying a habitat that was not used by the other species. This effect was only documented when one of the habitat options comprised a structurally more complex macrophyte habitat, emphasizing the link between structural complexity and interspecific interactions. Non-native round gobies of different size groups possessed a distinct diet composition, and juveniles of this species were most abundant in shallower, densely vegetated habitats, indicating that the impact of this invader on native biodiversity might depend on which round goby size classes are present in a specific environment. Direct predation impacts of round gobies on native invertebrate communities comprised a decline in overall abundance, biomass and species richness, with the most pronounced negative effect on the abundances of common bivalve and gastropod species and their associated trait categories. Thus, round gobies altered both the taxonomic and trait-based diversity of native invertebrates, which might entail repercussions for certain ecosystem functions, such as the magnitude of grazing.
The findings of this thesis demonstrate that biological interactions contribute to the structuring of communities across habitats by affecting the habitat use of mobile organisms and by directly modifying community composition and diversity via predator-prey interactions. Biological interactions therefore represent important factors influencing biodiversity across coastal habitats and are thus relevant for ecosystem functioning. This thesis also highlights the significance of structural habitat complexity, which influences community structure and diversity, as well as biological interactions. Finally, the results suggest that biological traits should be incorporated as indicators in the management and conservation of coastal habitats, as they provide important information on the link between coastal habitats, community biodiversity and ecosystem functioning.