'Child Brides' in Europe : Third State Obligations in the Recognition of Child Marriages Concluded Abroad and the Conflicting Norms 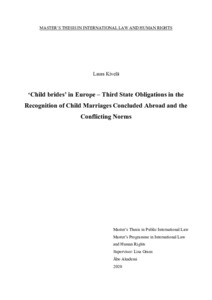 After the so-called refugee crises that began in 2015 in Europe, the number of child marriages within European borders have increased significantly. Even if it is undisputed that marriages concluded without a full, free and informed consent are prohibited in international law, child marriages, where the young child brides may not fully understand the nature and consequences of the union unfortunately do happen all over the world and many jurisdictions still accept the practice. Therefore, it is not uncommon that young refugee girls migrating to Europe are married. The migrating child brides have given rise to heated debates about the extent of EU States’ obligations towards the recognition of such marriages. The question is,
in what circumstances should a child marriage concluded abroad be recognized in EU Member States and when is it acceptable under international law to refuse to recognize the legal validity such marriage?

There is no absolute obligation of non-recognition of a child marriage concluded abroad in international instruments but during the recent decade, there has been a trend in Europe towards a total ban on such marriages; already five States have enacted laws prohibiting entirely the recognition of foreign child marriages and thus automatically limiting the child brides’ right to family life and at times exposing the child to the risk of torture or ill-treatment. States that have refused to recognize foreign child marriages have become subjects of debate on whether they are conforming their international obligations by automatically limiting the rights of the child brides but on the contrary, the recognition of a child marriage may mean that the recognizing State tolerates severe human rights violations within its State borders.

This thesis is a doctrinal study that analyses the extent of EU States’ obligations with respect to foreign child marriages by analysing the situations where limitations on the child brides’ right to family life and prohibition of torture under the European Convention on Human Rights may be justified. The conclusion that is drawn is that limitations on the right to family life are allowed within the limits of the principle of proportionality and margin of appreciation and that under the principle of ordre public States do not have to enforce a foreign marriage if it is against the public policy and morals of that State. Nevertheless, derogation from prohibition of torture is not possible. In situations where both the child marriage as well as its non-recognition would expose the child to torture or ill-treatment, the States must exercise due diligence in preventing and addressing the possible violations and the decisions concerning the marriage shall be made according to the standard of the best interests of the child.

There is no straightforward answer to the primary question of this thesis, but this study argues that a total ban on the recognition of foreign child marriages violates the States’ obligations under international human rights law. Each child marriage should be considered on an individual basis taking into consideration the interests of the State and the child, with the best interests of the child
as the primary consideration.