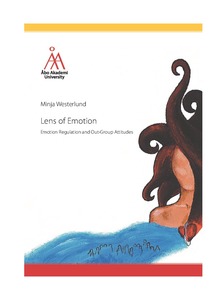 Westerlund, Minja
Åbo Akademi University
This publication is copyrighted. You may download, display and print it for Your own personal use. Commercial use is prohibited.
Näytä kaikki kuvailutiedot
Julkaisun pysyvä osoite on
http://urn.fi/URN:ISBN:978-952-12-3934-2

Emotions play an important role in intergroup attitudes, and more
broadly, in intergroup relations. Emotions, and intergroup emotions more
specifically, arise based on an individual’s appraisal of an out-group
situation, and the emotion triggers a corresponding action tendency. An
especially robust source for negative intergroup emotions and negative
intergroup attitudes is perceived intergroup threat. The aim of the present
thesis was to assess whether a down-regulation of negative emotions after
perceived intergroup threat would result in more positive attitudes toward
those out-groups.
In Study I, we assessed two emotion regulation scales; a scale assessing
emotion dysregulation and another targeting more normative, habitual
forms of emotion regulation. The latter assesses two commonly studied
emotion regulation strategies, cognitive reappraisal and expressive
suppression. Both scales were found to be psychometrically sound and
were used in all our subsequent studies.
In Study II, we investigated the relationship between habitual emotion
regulation and out-group attitudes. We found that habitual expressive
suppression was associated with decreased acceptance toward out-groups.
Cognitive reappraisal was not associated with increased acceptance, in
contrast to previous literature.
In Study III, we assessed whether there was a causal link between
emotion regulation and out-group attitudes after exposure to threatening
stimuli. The stimuli consisted in real news material depicting different
kinds of intergroup threats. Participants who received no instructions to
regulate their emotions when reading upsetting news articles had
significantly higher levels of anger than those who cognitively reappraised
their emotions. Similar results were found for disgust when comparing the
reappraisal and control group, but the association was not significant. We
found that both cognitive reappraisal and expressive suppression
increased immediate acceptance of target out-groups, compared to the
control condition. It may be that merely attending and focusing on
emotional reactions serves as a regulator resulting in less negative
intergroup attitudes, compared to a condition where no such instructions
are given.
In Study IV, we assessed whether modifying emotional reactions when
reminded of a real terror attack would affect attitudes toward out-groups
perceived to be associated with the attack. Cognitive reappraisal
significantly decreased negative emotions, and mindful attention
increased them. We also found that adverse emotions directly negatively
predicted the attitudes toward attack-associated groups, but not toward
other groups. The reappraisal and mindful attention conditions affected
the out-group attitudes via negative emotions. The out-group attitudes
were not directly affected by the experimental condition. Additionally,
posttraumatic stress symptoms correlated significantly with the degree of
negative emotions both before and after the threatening stimuli reminding
of the terror attack. The posttraumatic stress symptoms also correlated
negatively with the acceptance of attack-associated groups, but not other
groups. The results from studies III and IV indicate that the delay between
intergroup threat, the emotion regulation intervention and the attitudinal
outcome may play a role, as well as the type of threat.
The results of the present studies can be applied both in preventive and
clinical measures. For example, they can be of interest together with other
interventions for programs aiming at improving intergroup attitudes or
preventing negative intergroup attitudes. Such initiatives may be of
interest for example for actors working in multicultural settings, in schools
and correctional facilities for individuals who have previously engaged in
intergroup hostilities.