Could stronger capital requirements have negative effects on the Finnish economy? : Estimating the impact of implementing Basel III 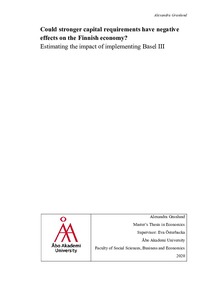 The purpose of this thesis is to examine the macroeconomic effects of implementing the Basel III capital requirements in the Finnish economy, to conclude whether the effects could be different from what the Basel committee estimates in their long-term economic impact study (BCBS, 2010). The thesis applies the theoretical framework of optimal bank capital from the BCBS 2010 report, to increase the comparability of the results.

All in all, it is difficult to conclude the optimal level of bank capital in Finland without any exact estimates of the benefit of bank capital. Nevertheless, the results of this study suggest that there is still room to strengthen the bank capital requirements in Finland, from the Basel II level.