Sex Differences in Aggression within Adult Samples in Ghana 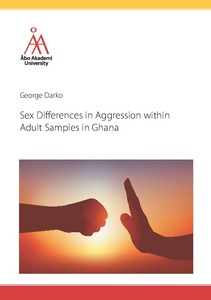 Darko, George
Åbo Akademi University
This publication is copyrighted. You may download, display and print it for Your own personal use. Commercial use is prohibited.
Näytä kaikki kuvailutiedot
Julkaisun pysyvä osoite on
https://urn.fi/URN:ISBN:978-952-12-3932-8

Previous studies into sex differences in aggression have suggested that in most patriarchal African nations, sex roles, and traditional beliefs have predisposed men and boys to dominate women. This circumstance has consequently restricted females from gaining access to resources that would make them less dependent on males. However, gender empowerment and traditional beliefs are not static. Ghana has undergone tremendous socioeconomic changes in the past twenty years, and has become one of the strongest economies in Africa, resulting in increased socioeconomic status for women.
The purpose of the current thesis was to examine sex differences in victimisation and perpetration of aggressive behaviour among different samples of adults in Ghana, including normal couples in domestic settings, prisons, and workplaces. A second purpose was to assess the relationship between mothers’ and fathers’ use of harsh punishment on their children and their retrospective account of their own experiences of harsh parenting in childhood. All participants represented the various ethnic and religious groups forming the fabric of Ghanaian society. Study I investigated sex differences in the perpetration and victimisation from low intensity intimate partner aggression (IPA) to ascertain whether the revised gender symmetry theory would hold in a community sample in Ghana, a patriarchal, non-Western nation. It involved a sample of 1,204 participants (602 males and 602 females) who filled in the DIAS-Adult questionnaire.
In order to assess sex differences in aggressive acts in prison, a total of 1,717 inmates filled in the Prison Aggression Questionnaire in Study II. The third data set which assessed sex differences in workplace bullying, the effect of level of occupation on aggression, and mental health associated with workplace bullying, was measured with the Work Harassment Scale and the General Health Questionnaire. It involved 1, 273 employees from public institutions. The relationship between mothers’ and fathers’ harsh punishment of their children was assessed with the Brief Physical Punishment Scale in Study IV, which involved 1,202 respondents.
The overall reports suggested that the role of gender in aggressive acts may be better understood by examining traditional sex roles, the contexts in which aggressive acts occurred, and socioeconomic changes that focused on increasing women empowerment. In particular, the relationship between gender empowerment and aggression was highlighted in Study I, which found females perpetrating more physical, indirect, nonverbal, and cyber aggression than males, contrary to expectations of a patriarchal nation. A high educational level was positively associated with both perpetration and victimisation of IPA. In prisons, all-sex-segregated settings where individuals have not voluntarily chosen to live together, (Study II), females were more often victimised from sexual aggression than males, even though there is a very strong anti-homosexual culture in Ghana. In prisons, males used more physical aggression than females, while females used indirect aggression more than males. There were no sex differences in frequency of victimisation from workplace bullying in Study III. Occupational status was significantly associated with bullying: junior staff members reported higher levels of victimisation from bullying and higher levels of psychological distress than senior staff members, highlighting the effect of settings on aggression. In study IV, the findings showed associations between mothers’ and fathers’ childhood experiences of harsh punishment and their current use of such disciplinary techniques on their own children. Exposure and transmission varied by sex in that males were more exposed to harsh punishment when they were young than females, and they also punished their own children more often than females.
The current thesis provides an analysis of sex differences in aggressive acts among adults in Ghana. The traditional view of men being the main aggressors in patriarchal Africa may be changing partly due to the improvements in the socio-economic status for women.