Animated Stereotypes : An Analysis of Disney’s Contemporary Portrayals of Race and Ethnicity 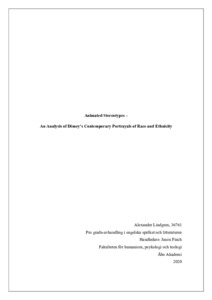 Walt Disney Animation Studios is currently one of the world’s largest producers of animated content aimed at children. However, while Disney often has been associated with themes such as childhood, magic, and innocence, many of the company’s animated films have simultaneously been criticized for their offensive and quite problematic take on race and ethnicity, as well their heavy reliance on cultural stereotypes.

This study aims to evaluate Disney’s portrayals of racial and ethnic minorities, as well as determine whether or not the nature of the company’s portrayals have become more culturally sensitive with time. To accomplish this, seven animated feature films produced by Disney were analyzed. These analyses are of a qualitative nature, with a focus on imagology and postcolonial literary theory, and the results have simultaneously been compared to corresponding criticism and analyses by other authors and scholars.

Based on the overall results of the analyses, it does seem as if Disney is becoming more progressive and culturally sensitive with time. However, while most of the recent films are free from the clearly racist elements found in the company’s earlier productions, it is quite evident that Disney still tends to rely heavily on certain cultural stereotypes. Furthermore, it seems as if the Disney films that could be regarded as musicals, as well as films based on other culturally specific material (e.g. legends or folk stories), frequently include more problematic portrayals of racial and ethnic minorities.

This study provides an overview of Disney’s contemporary portrayals of race and ethnicity, and the findings presented here could consequently be used to further explore Disney’s approach towards this issue.