Drivers of plankton populations in the Baltic Sea 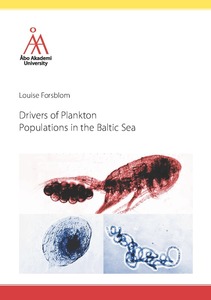 Forsblom, Louise
Åbo Akademi University
This publication is copyrighted. You may download, display and print it for Your own personal use. Commercial use is prohibited.
Näytä kaikki kuvailutiedot
Julkaisun pysyvä osoite on
http://urn.fi/URN:ISBN:978-952-12-3943-4

Plankton are at the base of the food chain, and identifying their drivers is important for understanding how climate change will impact populations and communities. The main aim of my thesis was to quantify the effects of environmental drivers on population dynamics of natural phyto- and zooplankton populations (mainly species and genera) using population dynamical modelling of time-series data. However, using time-series data for modelling population dynamics presents multiple challenges as data are never perfect. All data collection and observation processes contain multiple sources of uncertainty and in my thesis, I make an effort to account for such sources, with more detailed consideration of seasonality and wind.
In a case study investigating the spatio-temporal population dynamics of six phytoplankton species, populations displayed a high level of synchrony in their annual biomass dynamics across the northern Baltic Sea, likely caused by the Moran effect. When I further investigated abiotic drivers in the Gulf of Finland, individual auto- and heterotrophic plankton taxa were mainly driven by temperature, salinity and stratification.
Identifying temperature effects on abundance can be challenging, as temperature can also affect seasonal timing of populations. While there were few direct effects of temperature on zooplankton abundances, there were changes in their seasonal occurrence to earlier spring, likely connected to warming.
I also investigated potential biotic interaction between zooplankton and zoobenthos, as zooplankton can have resting eggs in the sediment. The results indicate that biotic interactions were important on annual scale within zoobenthos, but no interactions between zooplankton and zoobenthos were apparent.
Based on the findings in my thesis, many of the identified environmental effects on densities were large in relation to the environmental variability. There is also a need to consider seasonality when investigating plankton populations, as ignoring changes in phenology can lead to noisier estimates or to issues with interpreting temporal patterns.