Validation of a Digital Twin for a Ship Engine Cooling System 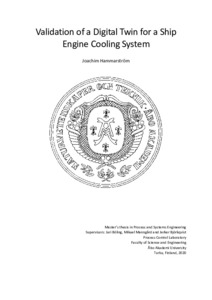 The energy efficiency of ships is becoming more and more important due to increasingly stringent international maritime regulations and rising fuel cost. While many methods have already been put in use that increases the efficiency of some parts of the ship’s energy system, the whole power plant has not received much attention.

In this thesis, data taken from a ship was used to modify and adapt a model of a ship engine cooling system made in Simulink which was then validated.

The results show that even with relatively limited data and a quite simple model, it is possible to simulate the cooling system of a ship’s engine quite well. Of the three available temperature measurements, the model was reliably able to simulate two of them while the third had a few issues.