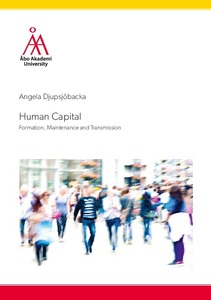 Djupsjöbacka, Angela
Åbo Akademis förlag - Åbo Akademi University Press|
This publication is copyrighted. You may download, display and print it for Your own personal use. Commercial use is prohibited.
Visa fullständig post
Publikationens permanenta adress är
https://urn.fi/URN:ISBN:978-951-765-960-4

Human capital, as measured by your text-based and numerical problemsolving skills, varies between countries as well as between cohorts of individuals from the same country. The forces driving these patterns are poorly understood, however. This thesis deals with topics related to the development and maintenance of human capital in different stages of life. The research questions include: To what extent does schooling contribute to the development in students’ problem-solving skills (chapter 3)? Does graduating in a slow economy affect your future cognitive performance (chapter 4)? Does retirement influence the age-trajectory in cognitive functioning among the elderly (chapter 5)? This thesis also addresses a somewhat different but related topic, by analyzing college application behaviors of high school graduates, and how these behaviors differ depending on socioeconomic background (chapter 6). Chapter 2 is the odd one out, where I present the adjusted-POLS estimator. This is a variant on the POLSestimator, suggested by Praag & Ferreri-i-Carbonell, and it is used for estimating ordered response models. In addition, I also suggest an estimator for a marginal effect, when controlling for a latent independent variable.
In order to answer these questions, I mainly rely on survey data from the The Programme for the International Assessment of Adult Competencies (PIAAC) which covers tens of thousands of individuals from different OECDcountries(including Russia). The identification regularly relies on exploiting different instruments as exogenous stimuli in the variable of interest. Based on the data, I argue for the following main conclusions: 1) Post-primary schooling has meaningful effects on cognitive performance later in life. The performance gap between university students and ‘others’ is, however, best explained by self-selection. 2) Graduating in a bad economy may have negative impacts on your future cognitive performance. This effect, however, is likely to be economically small. 3) Retiring may slow down the age-related decline in cognitive performance among men. For women, the evidence points towards a positive effect on self-perceived health. 4) When applying to college, students gravitate towards colleges located nearby, and this tendency is somewhat stronger for those from poorly educated neighborhoods. Women from poorly educated neighborhoods apply in a way that is consistent with being comparatively wage risk averse. 5) Adjusted-POLS can be a useful alternative for estimating models with ordered responses in situations where ordered probit or logit are inappropriate or inconvenient.