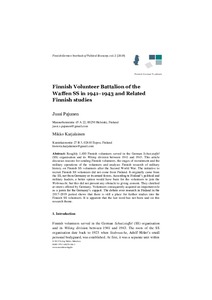 Roughly 1,400 Finnish volunteers served in the German Schutzstaffel (SS) organisation and its Wiking division between 1941 and 1943. This article discusses reasons for sending Finnish volunteers, the stages of recruitment and the military operations of the volunteers and analyses Finnish research of military history on Finnish SS volunteers after the Second World War. The initiative to recruit Finnish SS volunteers did not come from Finland. It originally came from the SS, not from Germany or its armed forces. According to Finland’s political and military leaders, a better option would have been for the volunteers to join the Wehrmacht, but this did not present any obstacle to giving consent. They clutched at straws offered by Germany. Volunteers consequently acquired an important role as a pawn for the Germany’s support. The debate over research in Finland in the 2017–2019 period shows that there is still a place for further studies into the Finnish SS volunteers. It is apparent that the last word has not been said on this research theme.