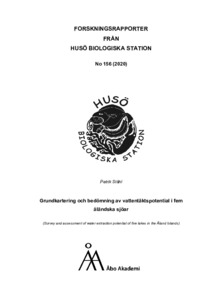 In the summer of 2019 five lakes (Bjärströmsträsk, Degerbergsfjärden, Dalsträsk, Kvarnträsk and Långträsk) in the Åland Islands were surveyed to determine their potential for water extraction. Water extraction from lakes can affect water levels, especially under drought conditions. Loss of water volume can lead to loss of species richness and to higher concentrations of nutrients in the lake. The lakes were surveyed by mapping vegetation and examining the benthic fauna as well as fish stocks. A basic “water budget” was calculated based on data on average annual catchment runoff and precipitation and was used to determine the potential for water extraction.
The potential for water extraction varied in the lakes. Three of the studied lakes (Bjärströmsträsk, Dalsträsk and Kvarnträsk) are already used for water extraction. The catchment areas of the studied lakes were all majority woodland, and two had a significant proportion of farmland (Bjärströmsträsk and Degerbergsfjärden). Based on the water budget: Bjärströmsträsk, Degerbergsfjärden and Långträsk were estimated to have good potential for water extraction. Kvarnträsk on the other hand had the weakest water budget and was estimated to lose water from just evaporation during dry years.
The ecological survey results indicated that all the lakes were found to have features potentially sensitive to effects of water extraction to some degree. Bjärströmsträsk was extremely shallow and had large populations of Charophytes that could be exposed if the water levels drop. Dalsträsk also had vegetation in shallow areas that could become exposed. A species of interest, Nitellopsis obtusa, was found in Långträsk. N. obtusa is classified as nearly threatened. Långträsk had two shallow areas that could start to be taken over by reed belts if the water levels drop. Degerbergsfjärden also had reed belts that could spread further out into the lake if the water level was reduced. Out of the five lakes, Kvarnträsk showed signs of ecological disturbance and additional disturbances could potentially further impact the lake.