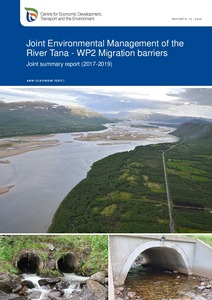 When the main roads along the river valley were constructed, many streams or small rivers running under roads were led into road culverts. Many of these culverts have either been detrimental to, or completely, prevented the distribution of juvenile migratory fish into the upstream nursery grounds. Since 1999, a large effort has been made to survey and rehabilitate road culverts or other fish migration barriers in the Tana river system. In this project the hindrances of road crossings were evaluated and the removal of fish migration barriers in the River Tana tributaries was done as a continuum for the work started in the 2000’s.

The aim of this publication was to combine the information of inspected road crossings in River Tana catchment area. In the report, earlier projects of fish migration barrier surveys are introduced as well as the results and measures of recent inspections done during the project of Joint Environmental Management of the River Tana. To combine the information of inspections done since the 1999’s, this report presents the current status of inspected sites in sum-up tables and the site locations on the maps.

In the past 20 years almost 300 road crossings have been inspected in the River Tana catchment area. As a measure of these inspections, 22 sites has been restored to enable fish migration. In most of the tributaries electrofishing has been conducted in order to identify the occurence of juvenile salmonids. According to the results of surveys in this project, the inspections and electrofishing showed that majority of previously restored sites are not a barrier for fish migration anymore. During this project, four road crossings were restored and are recommended to be inspected for their functionality of connectivity, both through physical evaluation and electrofishing, at regular intervals of 10 years.