Destruction of selected pharmaceuticals by ozonation and heterogeneous catalysis 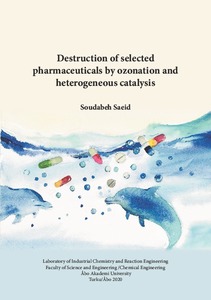 Saeid, Soudabeh
Åbo Akademi - Åbo Akademi University
This publication is copyrighted. You may download, display and print it for Your own personal use. Commercial use is prohibited.
Näytä kaikki kuvailutiedot
Julkaisun pysyvä osoite on
https://urn.fi/URN:ISBN:978-952-12-3912-0

The availability and quality of clean and safe water supplies is directly connected to the modality of wastewater treatment. Municipal wastewater treatment processes are designed to purify and degrade polluting components from water, most of these technologies are not capable to eliminate organic micro-pollutants entirely but might even increase the toxicity of the treated water compared to untreated water by transforming these contaminants to more toxic components. Among these organic pollutants, the frequently occurrence of pharmaceuticals in surface waters has attracted a significant concern due to their non-biodegradability, chemical resistance, and toxicity impact on the aquatic life. These contaminants and the by-products of their degradation continuously discharge to surface waters and maintain their chemical structure, and therapeutic efficiency for a long period of time.
The degradation of four frequently detected pharmaceutical molecules in the Baltic Sea region, ibuprofen, carbamazepine, diclofenac and sulfadiazine by catalytic and non-catalytic ozonation was studied in this work. The purpose of the research was to synthesize active and durable heterogeneous catalysts that, combined with an ozonation process could eliminate these contaminants without toxic by-products.
All these components were pharmaceutical destroyed within one hour by ozonation in a laboratory scale semi-batch reactor, however, the ozonation process produced several longlasting degradation by-products. The kinetics of the pharmaceuticals degradation and formation of by-products were investigated in detail. Twenty-four heterogeneous catalysts were screened in the presence of ozone to optimize the destruction process. For a better mass transfer between the phases and easier separation of catalysts, the catalysts were immobilized inside the SpinchemTM Stirrer. The catalytic ozonation technology allowed the enhancement of the degradation rate of pharmaceuticals and the suppression the formation of by-products. The catalytic and non-catalytic ozonation screening revealed the reaction kinetics of the pharmaceuticals and their transformed intermediates during the ozonation experiments. Later on, based these results, a kinetic model for the ibuprofen ozonation was derived. The model exhibited a good correspondence with experimental data.
The heterogeneous catalysts were synthesized by several methods and screened in the ozonation process to reveal the impact of various catalyst preparation techniques, type of metals, loading of metals on the catalysts, amounts of Lewis and Brønsted acid sites, type of supports, on the elimination of pharmaceuticals as well as the transformation and degradation of by-products. All-important characterization devices were employed to understand the performance of the catalysts (X-ray powder diffraction, transmission electron microscopy, nitrogen physisorption, scanning electron microscopy, energy dispersive X-ray microanalyses, pyridine adsorption-desorption with FTIR spectroscopy, X-ray photoelectron spectroscopy). Evaluation of the catalytic activity showed that some of the employed catalysts have the higher influence on the elimination of the pharmaceuticals such as Fe-H-Beta-25-EIM catalysts. Higher specific area, metal concentration and Brønsted acidity are some of the characteristics which made these catalysts valuable for the ozonation process.