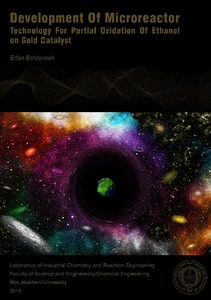 Behravesh, Erfan
Åbo Akademi - Åbo Akademi University
This publication is copyrighted. You may download, display and print it for Your own personal use. Commercial use is prohibited.
Näytä kaikki kuvailutiedot
Julkaisun pysyvä osoite on
https://urn.fi/URN:ISBN:978-952-12-3897-0

Oxidation of alcohols from biological origin is of significant industrial relevance for the production of fine and specialty chemicals. Aldehydes from polyols are important intermediates in pharmaceutical and alimentary industries. Gold nanoparticles dispersed on porous materials are effective catalysts in the oxidation of hydroxyl (–OH) to carbonyl groups (C=O) in the presence of environmentally friendly oxidizers such as molecular oxygen. Microreactors are suitable tools for especially oxidation reactions because of having excellent heat and mass transfer properties due to a high surface-to-volume ratio. The importance of microreactors lies in their small size causing a remarkable drop in capital and energy costs along with positive environmental impacts.
In this work, a range of gold catalysts supported on zeolites and oxides were synthesized via a depositionprecipitation method. The effects of the surface charge as well as the pH of the solution on the gold particle size and loading were investigated. Moreover, the effect of gold deposition on the support acidity was revealed.
Both a fixed bed and a microreactor were used for the partial oxidation of ethanol at atmospheric pressure and temperature range of 100–250°C. Catalyst screening was conducted using neat and gold-supported catalysts in the fixed bed reactor. The activities and the selectivities of the catalysts were discussed taken into account the effect of gold particle size and the support acidity.
Two catalytic coating methods of microreactor elements were developed using an Au/Al2O3 catalyst selected from the screening step as one of the most promising catalysts in terms of the activity and selectivity to the desired products. The first coating method was based on the use of a catalyst slurry. The advantage of this coating method lies in using a pre-prepared Au/Al2O3 catalyst without incorporation of any binders, addressing the importance of the interplay between the catalyst particle size and the slurry viscosity in the optimization of the uniformity, stability and thickness of the coating layer. The second method was inkjet printing. In this method, the alumina suspension was first printed into the microchannels followed by gold deposition via a deposition-precipitating step. This method has the advantage of a higher precision but a more complicated chemistry since additives are needed.
A model was generated to explain the experimentally observed fixed bed reactor behavior in the ethanol oxidation on gold nanoparticles. The model for this heterogeneously catalyzed gas-phase multireaction system consisted of dynamic mass and energy balances as well as Langmuir–Hinshelwood–Hougen–Watson (LHHW), Mars van Krevelen and power law expressions for the reaction kinetics. The gas fluid flow was described with convection and dispersion terms. The axial and radial concentration and temperature profiles inside the reactor and the concentration profiles within the catalyst particles were predicted by the model. The estimated parameters were the rate constants and the activation energies as well as the adsorption parameters for LHHW and Mars van Krevelen kinetics and reaction order of oxygen for power law kinetics. Numerical simulations were performed to illustrate the influence of the feed temperature and the catalyst loading as well as the effect of Péclet number on the obtained results.
A detailed modelling work was performed for the microreactor which resulted in a kinetic model for the reaction system. Dynamic mass balance-based generic modelling was applied to estimate the rate parameters from the experiments obtained with the microreactor. The aim of the study was to find out the operation conditions that favor the generation of the desired oxidation product.
Finally, molecular modelling computations at the DFT level were carried out to elucidate the reaction mechanism of the oxidative dehydrogenation of ethanol. Using the mechanism inspired by the computational studies, an improved kinetic model was developed by revisiting the previous data obtained with the microreactor to explain the measured rates of acetaldehyde formation. Moreover, the concentration profiles in the catalyst particles and layers were calculated numerically to evaluate the role of internal diffusion in the catalyst pores. The simulation results indicated the absence of internal mass transfer limitations for catalyst layer thicknesses less than 200 μm.