It`s about time : Comparing the Sense and Management of Time in Children with ADHD and ASD 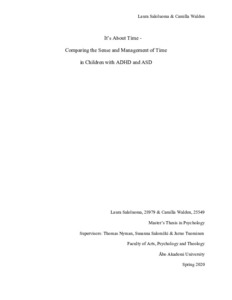 Abstract: An abnormal sense of time has been linked with several developmental disorders such as attention-deficit/hyperactivity disorder (ADHD) and Autism Spectrum Disorder (ASD). Earlier research has mainly focused on measuring time perception through different time production, reproduction and estimation tasks, while less focus has been placed on how parents perceive and report the time perception of their own children in everyday life. The focus of the study was to find out whether there are differences between how parents of the three groups (ADHD, ASD and typically developing children, TDC) rate their children’s sense of time with the It's About Time, Parent Form -Revisited (IAT-PF-R) -questionnaire, created by Russell A. Barkley (1998).
Our sample consisted of 29 children diagnosed with ADHD, 17 ASD children diagnosed with Asperger Syndrome and 20 typically developing children. The two diagnostic groups differed significantly from the typically developing children in impulsivity, F (2, 61) = 12,635, p=.000, η2 =.36. Our results show that ADHD subjects seem to experience more difficulties in forward planning with their everyday activities than the TDC, F (2, 61) = 10.421, p=.000, η2 =.25. The difference between the groups with ASD and ADHD in ability to plan forward was in line with the hypothesis; however, the difference was not significant. This warrants future attention. We found no significant differences between the groups with ADHD and ASD and the TDC group on the ability to comprehend past, present and future events.