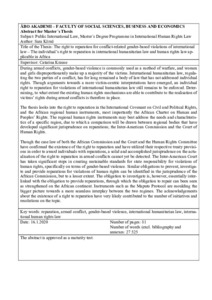 During armed conflicts, gender-based violence is commonly used as a method of warfare, and women and girls disproportionately make up a majority of the victims. International humanitarian law, regulating the two parties of a conflict, has for long remained a body of law that has not addressed individual rights. Though arguments towards a more victim-centric interpretations have emerged, an individual right to reparation for violations of international humanitarian law still remains to be enforced. Determining, to what extent the existing human rights mechanisms are able to contribute to the realisation of victims’ rights during armed conflicts is therefore in place.

The thesis looks into the right to reparation in the International Covenant on Civil and Political Rights, and the African regional human instruments, most importantly the African Charter on Human and Peoples’ Rights. The regional human rights instruments may best address the needs and characteristics of a specific region, due to which a comparison will be drawn between regional bodies that have developed significant jurisprudence on reparations; the Inter-American Commission and the Court of Human Rights.

Though the case law of both the African Commission and the Court and the Human Rights Committee have confirmed the existence of the right to reparation and have utilized their respective treaty provisions in order to award individuals with reparations, a solid and accomplished jurisprudence on the actualisation of the right to reparation in armed conflicts cannot yet be detected. The Inter-American Court has taken significant steps in creating sustainable standards for state responsibility for violations of human rights, specifically on terms of gender-based violence. Similar obligations to prevent, investigate and provide reparations for violations of human rights can be identified in the jurisprudence of the African Commission, but to a lesser extent. The obligation to investigate is, however, essentially interlinked with the obligation to provide reparations, through which the obligation to repair can been seen as strengthened on the African continent. Instruments such as the Maputo Protocol are moulding the bigger picture towards a more seamless interplay between the two regimes. The acknowledgements about the existence of a right to reparation have very likely contributed to the number of initiatives and resolutions on the topic.