A CRITICAL ANALYSIS OF THE YORÙBÁ CONCEPTION OF PERSON 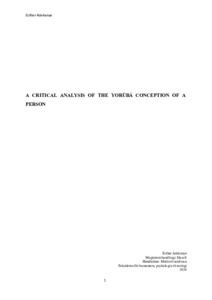 Personhood is a concept that has both a descriptive and normative dimension. Different philosophical traditions see the notion of a person as a phenomenon composed of not just a physical part, but also that of a non-bodily extension. While Descartes sees the human personality from a dualist position of mind and body, the Yorùbá, as well as most African traditions, understand the human personality as consisting of three parts or aspects: the material, the non-material and the quasi-material. An age-long belief in the history of human personality in an African thought system is the idea that personhood is attained at the fulfilment of communal norms and our collectiveness. These descriptions of African culture make clear its communitarian nature – a belief that holds that the community defines an individual. This paper challenges this claim as incomplete and as lacking a modern normative account of who a person is. Thereby, it makes a case for the inclusion of some existential phenomena that define a person in the Yorùbá thought system. This work will examine and compare the concept from the contribution of René Descartes and a Yorùbá-African conception. Attention is paid to the collective, that is, the communal concern of the idea of a person in an African thought system. Through this comparative and analytic method, this paper will recommend that beyond the tripartite conception of a person in the Yorùbá thought system, detailed attention needs to be paid to the existential function of human body parts.