Formic acid fractionation of bamboo and valorization of isolated lignin 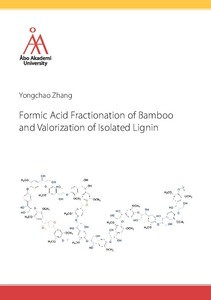 Zhang, Yongchao
Åbo Akademi - Åbo Akademi University
This publication is copyrighted. You may download, display and print it for Your own personal use. Commercial use is prohibited.
Näytä kaikki kuvailutiedot
Julkaisun pysyvä osoite on
http://urn.fi/URN:ISBN:978-952-12-3920-5

Lignocellulosic biomass is the most abundant and renewable natural resource on earth. It has been regarded as an environmentally sustainable raw material to be converted into chemicals and biomaterials. To profitably use the entire lignocellulosic biomass, its dominant components, i.e., cellulose, hemicelluloses and lignin, must be fractionated effectively based on a green pathway. Moreover, a fractionation process suitable for a flexible and economically feasible integrated biorefinery should be beneficial for the subsequent valorization of each obtained stream. In this thesis, formic acid fractionation of bamboo was developed to separate its major components. The obtained fractions were thoroughly analyzed by using advanced instruments analysis methods. Furthermore, valorization processes for the production of lignin nanoparticles, lignin-based composite and hybrid nanoparticles were developed to achieve integration of the concept of current biorefinery into nanomaterials production.
Firstly, one-step formic acid fractionation approach was developed for converting bamboo (Neosinocalamus affinis) to its main components focusing on the selective separation of lignin and hemicelluloses. Under the optimized conditions (i.e., 85% formic acid, a liquor-to-solid ratio of 7:1, and a temperature of 145 °C for 45 min), this process provided a high efficient way to produce 42.2% cellulose pulp, 31.5% lignin, 8.5% hemicellulose fractions. An integrated process combining autohydrolysis and formic acid rapiddelignification for bamboo chips was also explored. Autohydrolysis pretreatment facilitated oligosaccharide production, while the subsequent rapiddelignification using formic acid at a low liquid/solid ratio with a relatively short reaction time allowed to obtain cellulose fibers and lignin with a high purity.
Then, the structural characterization of lignin obtained from formic acid fractionation of bamboo was conducted. The results indicated that the formic acid fractionation under pressure presented a quick and efficient delignification method by enhancing the cleavage of interunitary bonds in lignin, however, condensation reaction of dissolved lignin also occurred. Compared to atmospheric formic acid lignin, high-pressure formic acid lignins obtained from both original and autohydrolyzed bamboo showed a higher purity and yield, and had relatively higher contents of phenolic and carboxylic groups.
The dissolved lignin was processed into nanoparticles (lignin-NPs), which exhibited spherical morphology and a uniform particle size distribution. Moreover, the obtained cellulose was easily converted into cellulose nanocrystals (CNCs) by using TEMPO oxidation in a relatively short time. Mixtures of lignin-NPs and CNCs were prepared and further filtrated to form nanocomposite films. The lignin-NPs were homogeneously dispersed in the CNCs matrix and the obtained nanocomposite films exhibited a very smooth surface. Most impressively, at CNCs/lignin-NPs ratio of 5:1, the tensile strength and Young’s modulus were improved by 44% and 47%, respectively, compared to the pure CNC film. Owning to the presence of lignin-NPs, the nanocomposites also exhibited an effective antibacterial activity against E. coli (ATCC 11229).
Additionally, novel hybrid nanoparticles were prepared by a facile method involving epichlorohydrin as a cross-linker between carboxymethylated lignin and amino-functionalized magnetic nanoparticles. Both the special nanostructures and the abundant active sites produced from the carboxymethylated lignin are beneficial for achieving excellent performance for the adsorption of heavy metal ions. The as-synthesized magnetic hybrid nanoparticles exhibited adsorption capacities of 152.4 and 71.4 mg/L for Pb2+ and Cu2+, respectively. More importantly, the adsorption equilibrium of Pb2+ and Cu2+ onto hybrid nanoparticles can be achieved within 30 s, which was among the fastest of those previously reported for Pb2+ and Cu2+ adsorbents. The binding mechanism of Pb2+ and Cu2+ by hybrid nanoparticles could be attributed to ion exchange and hydrogen bonding.