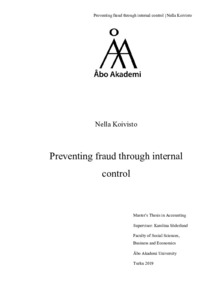 In the past decades, companies have come to a better understanding of the risk of fraud. During the same time, appreciation of internal control has increased. The degree of internal control varies, however, between companies. Even though previous research has indicated that internal control offers a tool for fraud prevention, studies have shown that there are companies that use ineffective controls.

The objective of this thesis was to increase the understanding of how companies use internal control to minimise the risk of internal fraud in a European context. In addition, effectiveness of different types of controls was researched; areas for improvement were also considered. Semi-structured interviews were used as the research method. Both internal and external stakeholders were interviewed to obtain a broader understanding of the topic.