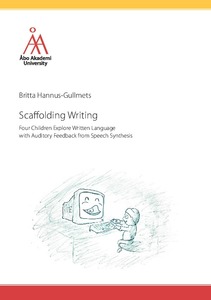 This is a study about a teaching project in which children wrote texts on a computer with a digital aid, auditory feedback from speech synthesis. The study is a multiple case study with four cases, and the aim to increase knowledge of literacy skills development when writing is scaffolded by auditory feedback in collaboration with a teacher. Each case comprises a teaching period of five months, a school term. The point of departure is that literacy learning can be stimulated when a child and a teacher collaborate on a task which is slightly over the child’s level of competence and the teacher assists, scaffolds, the child in an appropriate way. The task which the children performed in this study was writing words and texts which they chose themselves. The function of auditory feedback was to help the children to find the symbols of the speech sounds and to explore the structure of words and sentences.
The work is based on participant observation of children’s writing, which is documented in fieldnotes, and documentation with keystroke logging and video recordings. The children’s reading and writing skills are tested before and after the research period. Writing with auditory feed-back took place in the children’s school as lessons in a one-to-one situation with a teacher who also was the researcher.
Analytic attention has been focused on the development of literacy skills, on the teacher’s ways of scaffolding the children’s writing, and on the children’s use of auditory feedback as a scaffold for writing.
The findings show that the three core characteristics of scaffolding were found in the material in this study, namely joint task engagement, contingent teaching and transfer of responsibility from adult to child. However, also challenges occurred. It was sometimes difficult for the teacher to find the right amount of scaffolding, and there are examples of both too much and too little scaffolding. The teacher occasionally wrote in a negative tune about the extent of the children’s difficulties and sometimes attended more to formal details in the text than to the content of the stories that the children were writing, which was problematic for joint task engagement.
The greatest development of literacy skills occurred in letter knowledge for the youngest child and in double consonant and punctuation for the two oldest children. The two younger children worked with word reading and word writing and with the reading direction. If they had suggested a letter too early, they had difficulties in finding the letter again in its right place, probably because they had experienced a failure. The two older children worked on words with double consonant, and each of them worked in his own way. The children used auditory feedback especially for the aspects of written language which were of immediate importance in their literacy skills development at that time, the younger children to find the letter they needed and the older children to check their spelling. When the children made corrections, repair, in their writing, a tendency to more independence was found in repair organisation.