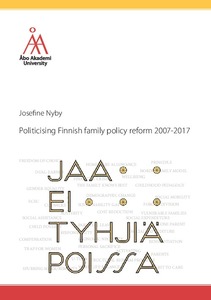 Family policy is an extensive and highly politicised field in social policy. Throughout the history of family policy in general, the aims have been to relieve poverty among families with children, increase fertility rates and, more lately, to reconcile work and family life. These aims have been reached through a combination of cash transfers to families with children and different benefits in kind, such as public childcare and parental leaves. What the particular aims of family policy should be, however, has changed over time and been discussed, negotiated and decided on by politicians and social actors, such as women’s groups and labour market organisations.
This doctoral thesis investigates how reforms in selected Finnish family policy areas were politicised 2007—2017, a period of economic turmoil and a varying political landscape. The overall aim of this thesis was to study how the Finnish family policy system was reformed during this ten-year-period, and how the reforms were politicised, in terms of what ideas were prominent in the political discourse.
In this doctoral thesis, an innovative way of studying reform was done, through studying reforms mainly from the input and the output perspectives, rather than focussing on the output and the outcome perspectives, which are typically the starting point in welfare state (reform) studies. The data consisted mainly of political documents, such as election manifestos, government programs, government bills and parliamentary minutiae. However, to get a more nuanced picture of the politicisation of family policy reform supplementary data, such as newspaper editorials and interviews (conducted in 2014) with family policy experts, were used for some of the articles. The data was analysed through qualitative content analysis.
The results show that, first, family policy was frequently reformed during this period. In the beginning of the period, the governments pursued expanding policy adjustments to cushion families from the economic crisis, and even a radical reforms to improve gender equality was pursued. Later governments, however, pursued contracting policy adjustments combined with a contracting radical reform to the ECEC-system. Second, the result show that two ideas – social investment and neoliberal austerity – fought for precedence. On the one hand, human capital was strengthened through reforming the public childcare system to early childhood education and care (ECEC). The emphasis was on the importance on investing in the future of all children. On the other hand, this principle was later weakened when access to fulltime ECEC was limited to those parents who were working or studying fulltime, as well as to entrepreneurs.
Thus, Finnish family policy remains highly politicised and based on the results it has indeed taken a turn towards a leaner family policy model. Whether this period was the staring point of a persistent leaner family policy model, compared to the generous Nordic family policy model, or whether this period only was an anomaly in Finnish family policy history, remains to be seen.