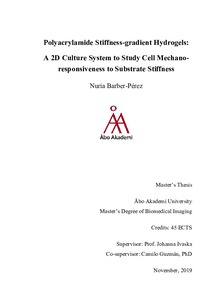 Stiffness of the extracellular matrix (ECM) has emerged as a prominent mechanical cue that influences cell behaviour and tissue homeostasis. Importantly, there is growing evidence suggesting that a prolonged dysregulation of the ECM mechanical properties contributes to the development of a permissive pro-invasive tumour microenvironment that favours cancer progression. Polyacrylamide (PA)-based hydrogels are one of the current culture systems to investigate the downstream cellular response to matrix stiffness. However, most of the available protocols for the fabrication of PA hydrogels are limited to uniform stiffness substrates that poorly reproduce the native ECM especially during pathological conditions. In order to mimic the effect of the ECM rigidity on cells, different methods have been developed for the generation of PA-based stiffness gradient hydrogels. However, most of these culture systems are either difficult to reproduce or lack the possibility to determine the stiffness of the gel at specific locations without the need of using atomic force microscopy (AFM).
In the framework of this Master’s thesis, a cost-effective and reproducible methodology has been developed for the fabrication of PA-based hydrogels with physiologically relevant stiffness gradients. The hydrogels have been embedded with fluorescently labelled beads and correlation curves between bead density and hydrogel stiffness have been generated, thus allowing the use of bead density as a readout for stiffness and eliminating the need for specialized equipment such as AFM. It has been confirmed that within a 2-60 KPa stiffness range, cancer cells behave as expected, hence demonstrating that these hydrogels can be used as a simple model to dissect different mechano-responsiveness aspects of cells to substrate stiffness.