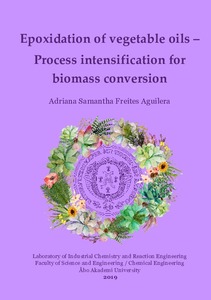 Oils extracted from plants, algae, seeds and wood are one of the vast biomass resources which can be used to elaborate a wide range of products. Tall oil obtained from forest biomass is a good source of vegetable oils, because it is a non-edible by-product of Kraft pulping process and it represents an abundant feedstock, particularly in Nordic countries. Epoxidized vegetable oils and fatty acids are used for developing PVC-derived plastic-ware and as intermediates for the synthesis of biolubricants, polyols, glycols, olefinic compounds and stabilizers for polymers. In other words, epoxidized vegetable oils are green platforms by excellence for the development of products and present an alternative to its derivation from non-renewable fossil resources.
This work has focused on the study of the Prilezhaev epoxidation of plant oils as a green process, since it uses renewable raw materials and produces biodegradable products through a non-toxic synthesis route. An important aspect of this thesis was the application of process intensification in the form of microwave irradiation, heterogeneous catalysis and new mixing technology (a rotating bed reactor) for a more energy-efficient process with higher product yields, compared to more conventional approaches.
The reaction was executed by peracetic acid formed in situ from acetic acid and hydrogen peroxide. Epoxidation of oleic acid as a model compound and tall oil mixtures was performed in a batch loop reactor. The core of the reactor system was a vigorously stirred tank which was coupled to a loop with a microwave cavity and a heat exchanger. The microwave effect was compared with the results obtained with conventional heating. The reactor system was equipped with a special mixing device (SpinchemTM), which allowed to immobilize solid resin catalysts and to minimize mass transfer limitations of the oilaqueous-solid system. An extensive series of kinetic experiments was carried out in the presence and absence of microwave irradiation and heterogeneous catalysts. Typical reaction temperatures were 40-70°C. From the separated aqueous and organic phases, the concentrations of acetic acid, hydrogen peroxide, peracetic acid as well as double bonds in the reactant oil and epoxidized oil were determined by titrimetric analysis. The kinetics of ring opening reactions was studied separately and some of the ring opening products were identified by NMR analysis.
The results showed that an increased temperature, as well as higher concentrations of acetic acid and hydrogen peroxide accelerated both the epoxidation and the ring opening processes. The epoxidation of oleic acid occurs spontaneously in the absence of the catalyst, but the reaction yield can be considerably improved by exposing the system to microwave irradiation and incorporating a solid catalyst. Several heterogeneous catalysts were screened to find the highest performance. However, the microwave effect was not visible in the presence of heterogeneous catalysts and microwave irradiation showed to be detrimental for the yields of tall oil epoxidation.
Detailed mathematical modelling of the multiphase system was carried out, starting from first principles. Detailed kinetic models based on reaction mechanisms were derived and the model parameters were estimated by non-linear regression analysis. The models for epoxidation with conventional heating and microwave irradiation in the presence and absence of a solid catalyst had a good correspondence between the experimental and calculated concentrations of the reaction components. The rate constants and activation energies for the perhydrolysis, epoxidation and ring opening reactions were obtained as a result of the parameter estimation.