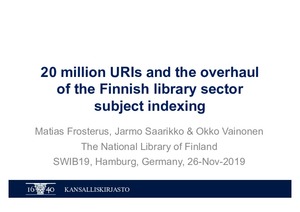 The library sector of Finland has been using the General Finnish Thesaurus YSA and its Swedish language counterpart Allärs for over thirty years. YSA is the most widely used thesaurus in Finland and comprises of some 36,000 concepts. Lately, the National Library of Finland has been developing the General Finnish Ontology YSO, a multilingual successor of YSA and Allärs built according to linked data principles. YSO has been linked to the Library of Congress Subject Headings, over a dozen Finnish vocabularies, and Wikidata.
This year, the development of YSA and Allärs was frozen and the Finnish libraries are switching to using YSO and linked data en masse. This presentation describes the process of the switch and the lessons learned.
First, we needed two sets of conversion rules: one for converting the SKOS YSO into MARC authority records to support the subject indexing processes and another one to convert the millions of bibliographic records from YSA and Allärs annotations to YSO. Devising the rules turned out to be a very complex task and we formed an expert group with representation from various types of libraries.
The conversion extends from the national union catalog Melinda to the local library databases employing various library systems. To this end we developed open source conversion programs and made them available to libraries and library system providers. Aside from the conversion, we also added YSO URIs to the MARC records making linking and updates simpler in the future.