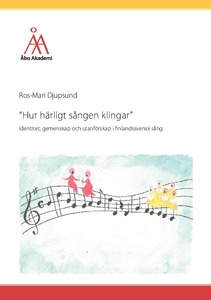 The overall purpose of this study is to critically examine how Finland-Swedishness in various forms is both expressed and constructed through singing, with an emphasis on group singing. Singing is not studied as a phenomenon of sound but rather as an activity anchored in culture. Finland-Swedishness, or "the Finland-Swedish", is presented as a linguistic and discursive phenomenon—a heterogeneous and changing construction, which is a representation that simultaneously influences and reproduces.
This study also investigates whether singing is currently used as a unifying element to consolidate the Finland-Swedes and if it thereby contributes to drawing boundaries between them and "others", especially Finnish speakers, but also Swedish speakers in Sweden. At the same time, the study examines the question of whether singing contributes to drawing boundaries within one's own language group and whether, in its excluding role, it creates tension within the group that can contribute to a sense of exclusion. This leads to the question of how this becomes visible in a Finland-Swedish context, and which forms and expressions feel inclusive and which ones feel exclusive.
The inspiration and starting point for the study are statements that choral singing is something typically Finland-Swedish and part of the strong social capital of Finland-Swedes, and thus contributes to making Finland-Swedes healthier and happier than their compatriots. Also, drinking songs (“snapsvisor”) are regarded as a typical Finland-Swedish tradition worth preserving. These perceptions are not only maintained and reinforced within their own group but are also retained as stereotypes held by "the other", that is, the Finnish-speaking majority population.
The study asks, among other things, whether all Finland-Swedes sing in choirs and whether everyone therefore thrives in their singing. It is also asked if there is a common repertoire that is sung in Swedish Finland or, on the contrary, if there are clear differences visible between various regions. From this repertoire, drinking songs are distinguished, and a subsequent question therefore arises regarding who actually sings them and to which form of Finland-Swedishness the drinking song tradition thus pertains.
The study material consists of surveys, interviews and observations and, to a certain extent, of printed and online sources. Singing is studied on the basis of the perceptions and expressions, as well as repertoires, of the studied individuals, but also on the basis of the central organizations that bridge together, above all, choral singing within the Finland-Swedish choir field. Thus, the question is: what is going on when Finland-Swedes sing together in a choral context or at informal gatherings where there is group singing? This applies within institutions and organizations, but also within the private sphere and at private parties.
The main purpose of the dissertation is problematized in three separate sub-studies. Common to the three sub-studies are issues that affect singing as an identity constructor and a creator of community, but also as a creator of exclusion. Similar studies, where singing among Finland-Swedes is examined in a cultural context, are lacking.