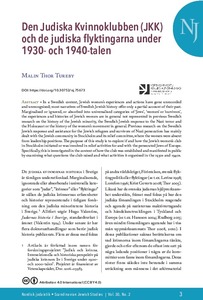 In a Swedish context, Jewish women’s experiences and actions have gone unrecorded and unrecognised; most narratives of Swedish Jewish history offer only a partial account of their past. Marginalised or ignored, or absorbed into universalised categories of ‘Jews’, ‘women’ or ‘survivors’, the experiences and histories of Jewish women are in general not represented in previous Swedish research on the history of the Jewish minority, the Swedish Jewish response to the Nazi terror and the Holocaust or the history of the women’s movement in general. Previous research on the Swedish Jewish response and assistance for the Jewish refugees and survivors of Nazi persecution has mainly dealt with the Jewish community in Stockholm and its relief committee, where the women were absent from leadership positions. The purpose of this study is to explore if and how the Jewish women’s club in Stockholm initiated or was involved in relief activities for and with the persecuted Jews of Europe. Specifically, this is investigated in the context of how the club was established and manifested in public by examining what questions the club raised and what activities it organised in the 1930s and 1940s.