Merchants of Helsinki: Jewish stereotypes on a Yiddish stage 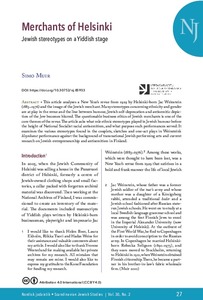 This article analyses a New Year’s revue from 1929 by Helsinki-born Jac Weinstein (1883–1976) and the image of the Jewish merchant. Many stereotypes concerning ethnicity and gender are at play in the revue and the line between humour, Jewish self-deprecation and antisemitic depiction of the Jew becomes blurred. The questionable business ethics of Jewish merchants is one of the core themes of the revue.The article asks what role ethnic stereotypes played in Jewish humour before the height of National Socialist racial antisemitism, and what purpose such performances served. It examines the various stereotypes found in the couplets, sketches and one-act plays in Weinstein’s kleynkunst performance against the background of transnational Jewish performing arts and current research on Jewish entrepreneurship and antisemitism in Finland.