Philo of Stockholm. The ecumenical heresies of Rabbi Marcus Ehrenpreis 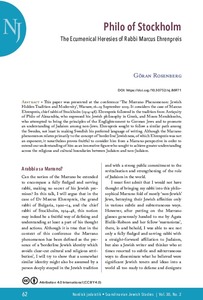 This paper was presented at the conference ‘The Marrano Phenomenon: Jewish Hidden Tradition and Modernity’, Warsaw, 16–19 September 2019. It considers the case of Marcus Ehrenpreis, chief rabbi of Stockholm (1914–48). Ehrenpreis followed in the tradition from Antiquity of Philo of Alexandria, who expressed his Jewish philosophy in Greek, and Moses Mendelssohn, who attempted to bring the principles of the Englightenment to German Jews and to promote an understanding of Judaism among non­Jews. Ehrenpreis sought to follow a similar path among the Swedes, not least in making Swedish his preferred language of writing. Although the Marrano phenomenon relates primarily to the concept of ‘borderline’ Jewishness, of which Ehrenpreis was not an exponent, it nonetheless proves fruitful to consider him from a Marrano perspective in order to extend our understanding of him as an innovative figure who sought to achieve greater understanding across the religious and cultural boundaries between Judaism and non­-Judaism.