The rotting fish? Institutional trust, dysfunctional contexts, and corruption tolerance : a multilevel study of the justification of low-level corruption in a global perspective 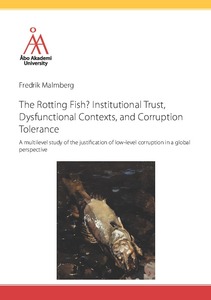 Tolerance of bribery, tax evasion, and other forms of what can be considered a type of low-level (societal) corruption or an indicator of civic morality, or rather the lack thereof, has been a much-debated phenomenon within the social sciences. Are some societies or cultures more accepting of corrupt practices, and if so, why? Do dysfunctional structures and corrupt elites generate dysfunctional citizens who tolerate free riding behavior (the so-called rotting fish thesis), or is corruption tolerance part of a “larger culture” that affects the quality of public institutions (the so-called raccomandazione thesis)? The central question examined in this study is hence “Do dysfunctional societal contexts generate dysfunctional citizens with a higher tolerance of corrupt behavior?”.
This overarching research question and the subsidiary research questions derived from it are approached using multilevel analysis of World Values Survey data from over 80 different countries from around the globe. The aim of these analyses is to empirically examine the relationship between both subjective and objective measures of societal dysfunctionality and corruption tolerance, operationalized using an index of corruption tolerance. A key individual-level factor is argued to be trust in the institutions that exercise government authority and are tasked with the implementation of public policy, namely the police, the courts, and the civil service (bureaucratic distrust). Public administrations and individual civil servants are generally expected to perform their duties in an evenhanded and efficient manner. Failure to meet these expectations may have deleterious consequences for the legitimacy and utility of the formal norms that citizens and firms are expected to follow, possibly resulting in wider acceptance of “uncivic” free riding behavior. The focus of this study lies partly on the conditions under which bureaucratic distrust influences corruption tolerance, and if/how the nature of this relationship varies depending on country characteristics such as the level of socio-economic development and economic inequality, the extent of public-sector corruption and government efficiency, and economic performance. However, this study is also interested in the potential direct effects of these contextual factors.
The results of the analyses in this study suggest that citizens who distrust the implementing authorities and perceive public officials as corrupt generally have a higher tendency of tolerating corruption. Moreover, out of the five previously mentioned main macro-level variables, only economic inequality is significantly related to corruption tolerance. Societies with a high level of economic inequality tend to show a higher tolerance of practices that can be understood as corrupt. Finally, the results suggest that the effect of bureaucratic distrust tends to be significantly weaker in highly unequal and highly corrupt societies, possibly due to varying expectations among citizens in different societies. Citizens in relatively equal societies with low levels of corruption are argued to have higher hopes and expectations of public institutions and officials, which can have negative consequences in the form of a higher corruption tolerance if they feel that they have been unfairly treated by the state.