Reconciling Proportionality with Reasonableness : The Adjudication of Retrogression-related Complaints under the Optional Protocol to the International Covenant on Economic, Social and Cultural Rights 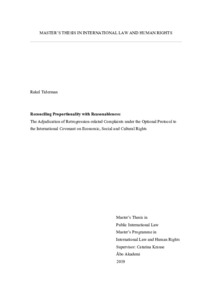 With the entry into force of the Optional Protocol to the International Covenant on Economic,Social and Cultural rights in 2013, a growing bulk of literature is focusing on how, not whether, socioeconomic rights should be enforced. A largely unresolved question in this regard, is how the Committee on Economic Social and Cultural Rights should purport to adjudicate individual complaints involving retrogressive measures, defined by scholars as backwards steps in the level of protection accorded to the Covenant rights as a consequence of an intentional decision by a State Party. The question
is particularly relevant since, in contrast to the other complaint mechanisms of the United Nations human rights treaty system, the Optional Protocol contains an express standard of review – the ‘reasonableness review’ – as provided by article 8 (4).

Among the challenges relating to the adjudication of retrogression related complaints, is the unclear relationship between retrogressive measures on the one hand and formal limitations on the other. Indeed, while the Covenant contains a general limitations clause as set in article 4, the Committee has developed a doctrine on non retrogression, in the light of which most active state interferences are reviewed. The doctrine is understood to mirror the concept of progressive realization contained in article 2 (1), since, by undertaking to progressively realize the Covenant rights, states simultaneously undertake not to reduce already achieved levels of access to them.

After having sought to clarify the normative content of the concept of non-retrogression, the thesis draws attention to the judicial enforcement of retrogression-related complaints. In the light of considerations of distributive justice, it is argued that the concept of non-retrogression should not be interpreted and applied in an excessively rigorous manner. This, particularly since a rigorous enforcement of the concept might obstruct the possibilities by states to redistribute resources to marginalized groups of society.

The thesis is concluded with three main findings. First, that because retrogressive measures in terms of article 2(1) and limitations in terms of article 4 share significant similarities, they should not be treated
differently, but instead reviewed under a single standard set by the general limitations clause. Second, that the concept of non-retrogression, designed for the purpose of monitoring result-based realization over the population as a whole, should not be applied in the context of individual contentious processes. And finally, that a standard of ‘reasonableness-inflected proportionality’, by reflecting the respective strengths of reasonableness and proportionality, might provide the answer for a socially just adjudication of active retrogression-related complaints under the Optional Protocol.