Evaluating faith after conversion: Arguments in religious media on the place of religious expertise in asylum appeals in Finland 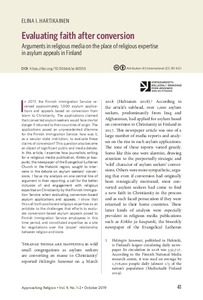 In 2017, the Finnish Immigration Service received approximately 1,000 asylum applications and appeals based on conversion from Islam to Christianity. The applications claimed that converted asylum seekers would face mortal danger if returned to their countries of origin. The applications posed an unprecedented dilemma for the Finnish Immigration Service: how was it, as a secular state institution, to evaluate these claims of conversion? This question also became an object of significant public and media debate. In this article, I examine how journalists writing for a religious media publication, Kirkko ja kaupunki, the newspaper of the Evangelical Lutheran Church in the Helsinki region, sought to intervene in the debate on asylum seekers’ conversions. I focus my analysis on one central line of argument in their reporting: a call for the better- inclusion of and engagement with religious expertise on Christianity by the Finnish Immigration Service when evaluating conversion-based asylum applications and appeals. I show that this call both positioned religious expertise as an antidote to the challenges that efforts to evaluate conversion-based asylum appeals posed to Finnish Immigration Service employees in this time period, and constituted expertise as a site for negotiations over the ‘proper’ relationship between religion and state.