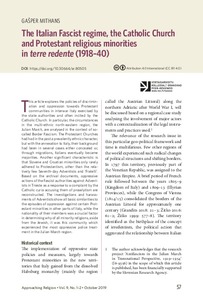 This article explores the policies of discrimination and oppression towards Protestant communities in interwar Italy exercised by the state authorities and often incited by the Catholic Church. In particular, the circumstances in the multi-ethnic north-eastern region, the Julian March, are analysed in the context of so-called Border Fascism. The Protestant Churches had had in the past a prevalently ethnic character, but with the annexation to Italy, their background had been in several cases either concealed or, through migrations, Italians eventually became majorities. Another significant characteristic is that Slovene and Croatian minorities only rarely adhered to Protestantism, other than the relatively few Seventh-day Adventists and ‘Fratelli’. Based on the archival documents, oppressive actions of the Fascist authorities against Adventists in Trieste as a response to a complaint by the Catholic curia accusing them of proselytism are reconstructed. The investigations and harassments of Adventists show all basic similarities to the episodes of oppression against certain Protestant minorities in other parts of Italy, while the nationality of their members was a crucial factor in determining why of all minority religions, aside from the Jewish, it was this community which experienced the most oppressive police treatment in the Julian March region.