Neo-nationalism in the 2010s: Religious aspects of the Nordic and Northern European extra-parliamentary far right 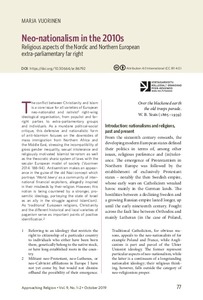 The conflict between Christianity and Islam is a core issue for all varieties of European neo-nationalist and nativist right-wing ideo­logical organisation, from populist and far-right parties to extra-parliamentary groups and individuals. As a mundane political-social critique, this defensive and nationalistic form of anti-Islamism focuses on the downsides of mass immigration from Northern Africa and the Middle­ East, stressing the incompatibility of gross gender inequality, sexual intolerance and religiously motivated Islamist terrorism as well as the theocratic sharia system of laws with the secular European model of society. Antisemitism makes an appearance in the guise of the old Nazi concept which portrays ‘World Jewry’ as a community of international financial exploiters, allegedly inspired in their misdeeds by their religion. However, this notion is being countered by a stronger, pro­semitic ideology, portraying the state of Israel as an ally in the struggle against Islam(ism). As ‘traditional’ European religions, Christianity and the different historical and local varieties of paganism serve as important points of positive identification.