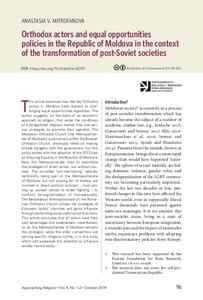 This article examines how the key Orthodox actors in Moldova have reacted to challenging equal opportunities legislation. The author suggests, on the basis of an economic approach to religion, that under the conditions of a deregulated religious market they use various strategies to promote their agendas. The Moldovan Orthodox Church (the Metropolitanate of Moldova), autonomous within the Russian Orthodox Church, previously relied on making private bargains with the government; but this policy ended with the adoption of the 2013 Law on Ensuring Equality in the Republic of Moldova. Now the Metropolitanate tries to assimilate the strategies of direct action, but without success. The so-called ‘non-mentioning’ radicals, technically being part of the Metropolitanate of Moldova, but not praying for its bishop, are involved in direct political activism – from setting up protest camps to street fighting – to confront de-stigmatization of homosexuality. The Bessarabian Metropolitanate of the Romanian Orthodox Church utilizes the strategies of European ‘public’ churches and gains influence through performing some useful social functions. This article concludes that all actors have their own advantages and weaknesses; nevertheless, so far the Metropolitanate of Moldova remains the strongest; while the other competitors are serving specific religious niches, it is this body which still possesses the potential to influence society more broadly.