Determining the metamorphic degree around graphite occurrences in the Heinävesi area 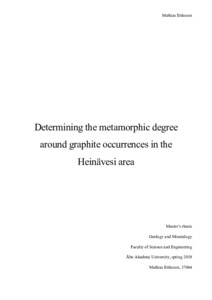 The aim of the study is to determine the pressure and temperature conditions around graphite occurences in the Heinävesi area due to the important relationship between metamorphic degree and graphite quality.
Most rocks in the Heinävesi area are quartz-biotite-plagioclase gneisses and biotite paraschists with varying graphite content from disseminated flakes to several percentages. Diatexites and metatexites are common, suggesting partial melting, with occasional garnets, amphiboles and orthopyroxenes.
The rocks are metapelites and greywackes that deposited in a marine-basin created by the break-up of the Neoarchean continent during 2.1-2.05 Ga. The deposition continued until the Svecofennian orogeny when the sediments were thrusted, deformed and metamorphosed by the accretion of the Keitele microcontinent at 1.91 Ga. The metamorphic degree of the rocks has been determined by garnet-biotite thermometry, pseudosections, field observations and thin section analysis. The garnet-biotite thermometry yielded sub-melting temperatures for metapelites (505-640 C°) and is not representative for peak metamorphic temperatures. Due to the observation of diatexites and metatexite a minimum temperature of 650 C° can be concluded. By the occurrence of orthpyroxenes in the thin sections a higher minimum temperature of 750 C° was determined. Pseudosections 015 and 083 yielded a pressure and temperature range of 775-800 C° and 2.8-8 kbar, placing the Heinävesi area in the upper amphibolite facies which is supported by the litterature. A high metamorphic degree improves the quality of the graphite making this area suitable for exploration.