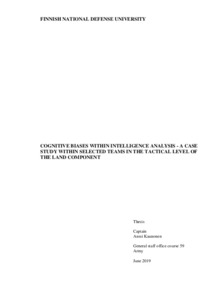 The framework of the research was meta-analyzed from literature found from research databases. The empirical part of the research used triangulation (data and method) to gather the maximum amount of data from two exercises hosted by a computer-aided simulator. Supportive questionnaires were used to examine the background of the analysts. Passive observation was used as the primary method during the exercises, with questionnaires, interviews
and comparison of products to simulator data used as supportive methods. Use of previous research methodology in other fields was used as a starting point for this research; the methods were combined and tailored to be suitable for the setup of this particular research.

Of the selected biases, confirmation bias was observed very frequently in both cases. Group thinking bias was observed very frequently in the second case of this research. Both biases were found to affect the analysis process. Especially the effect of group thinking bias was found to be hard to evaluate by the analysts themselves, even after the exercise being studied. The other selected biases (mirror imaging, vividness bias, anchoring effect) were all
observed, but less frequently. The use of structured analysis techniques were found to have very little impact on the frequency of the biases or their effects - the use of the techniques was however observed to be at a very elementary level by the analysts in the relevant cases.

The results of the research lead to two recommendations: simple structured analytical techniques should be focused on more during the early phases of the analysts training to lessen the impact of cognitive biases, and that the composition of the analyst teams should be heterogeneous to avoid group thinking bias.