Frontex as a European Coast Guard : a scorecard of public value generation by Frontex towards the eleven coast guard functions 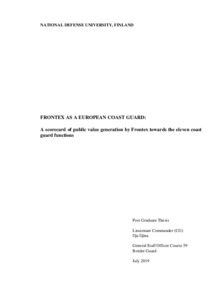 The process of mapping out these concrete ways of public value generation was conceptualized as a form of performance measurement using the Public Value Scorecard model by Dr. Mark Moore. Based on the model, a specific Frontex Coast Guard Functions Scorecard was created as the performance
measurement framework for the research. The Scorecard was then applied to the reference year of 2017 in order to appraise the concrete public value generated towards coast guard functions by Frontex on the given year. The data for the Scorecard was collected from publicly available statistics, by further data requests to Frontex, by interviews with Frontex officials and with officials from other European agencies, by analyzing media coverage as well as by online questionnaires to Frontex, to other European Agencies and to the majority of the European national coast guard authorities.

In conclusion, Frontex is a significant actor in the field of coast guard functions in Europe. Considering
that the Frontex mandate was significantly reinforced in 2016 and that the implementation of the new
mandate is still in many ways a work in progress, Frontex’s role is poised to markedly grow in the
upcoming years. In the long term, the growing power of Frontex can lead to national coast guard
authorities questioning the need for the duplication of certain capabilities on the national level.