The Human Being, the Environment and the World : An Exegetical Study of the History of Environmental Philosophy and the Contemporary Context of London, United Kingdom 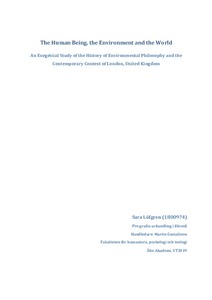 This thesis aims, firstly, to conduct an exegetical comparative analysis of the theories of 20th century environmental philosophers Arne Næss, Max Scheler and Gregory Bateson with the intention to analyse whether or not there are any similarities between these thinkers in terms of which holistic constellation is considered to exist and to be of either intrinsic or intrinsic value, as understood by Michael J. Zimmerman. Secondly, the thesis aims to analyse whether or not there exist any similarities between the aforementioned philosophers and the selected contemporary London-based environmental preservation organisations of The Green Party of England and Wales, Women’s Environmental Network and Organiclea in regards to the existence of the holistic constellations discussed by the philosophers and the conception of them as holding either intrinsic or extrinsic value. The thesis finds that Næss’s, Scheler’s and Bateson’s theories, at large, can be classified under the overall perspective of holism. The commitment to holism is expressed in three common topics of interest for these philosophers where it is possible to discern similarities; the idea that the faculties within the human being are in collaboration, that the human being are in relationships with her surroundings that contribute to the sensation and constitution of the own self and the existence of and participation in a world-wide metaphysical system. These findings are thereafter applied to the contemporary environmental debate taking place in London by example of the aforementioned organisations in order to explore the possibility of similarities as detailed above. The thesis finds that the differences between the philosophers and the organisations clearly outnumbers the similarities, thus it is suggested that the word “associations”, rather than “similarities” is more appropriate in the description of the connection between these relata. The reason for this preference is that it seems that the organisations adhere to the overall conceptions of the human being, the environment and the world as suggested by Næss, Scheler and Bateson but the organisations re-interpret these topics in accordance with their contemporary context and specific aims, which affects the conceived values associated with these topics. It is noted, further, that the medium utilised and intended audience of the organisations equally effects the conceived value. As different from Næss, Scheler and Bateson, these organisations utilises an online platform with limited space, thus, opportunity to embark on an extensive explanation into the reasons for their aims. Rather, the organisations seek to address and rectify the grievances of contemporary human being in London or United Kingdom at large. As a result, the rhetoric of the organisations mainly involves calls for activisms and aims at attracting new members, which is not present in the theories of the philosophers.