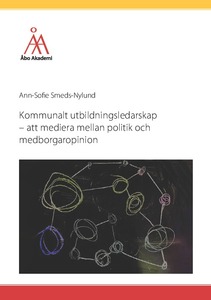 This thesis discovers how public educational leadership in municipal Finland becomes visible in a local and social media public debate. The purpose is to contribute to the understanding of public decision-making processes concerning educational issues in a complex situation with conflicting expectations, concious guardians, limited resources and new social media in the society.
The theoretical framework of the thesis consists of a non-affirmative inspired interpretation of an educational leadership perspective (Benner, 2001). In democratic education administration, this means that teachers, citizens, educational leaders and elected representatives are allowed and expected to contribute to the common decisions that affect a country, a municipality or a school´s educational activities (Uljens & Rajakaltio, 2015). The pedagogical theory of action is supplemented by an institutional perspective, as the educational leadership is exercised in a multidimensional institutional context with ideas that mediate influence between local class-rooms and transnational levels. Discursive institutionalism (Schmidt, 2002) provides a framework for interpreting the transformation of political ideas in discourses.
The research questions are formulated as 1) What characterizes the discourses that arise in schoolreforms? 2) What kind of change do the discourses lead to?
The empirical research object is a schools network change in Helsinki in 2012. The empirical material consists of social media posts, newpaper editorials and letters to the editor. The empirical material is analysed with critical discourse analysis (Fairclough, 1994; Gee,2011).
The results show that the discourses are charcterized by the citizens´questioning of decision-making processes regarding municipal educational arrangements. Tradition and identity issues regarding the Finnish-Swedish population in Finland, as well as rationality and economy within the framework of the state and municipality, become visible. The impact of the discourses concerned was small. They showed the importance of politics and educational reality mediating educational leadership. The discourses showed the gueardians as a collaborative resource. The school in Swedish- language in Finland turnded out to be dependent on the majority population´s elected representatives recognising the minority.
Every society where educational reforms are implemented is its own context. National legislation and municipal governing documents create a framework within which decision-making concerning education matters take place. Nevertheless, from this thesis one can conclude that educational policy issues, municipal decision-making and municipal activities would gain legitimacy through non-affirmative educational leadership, mediating educational leadership and communicative discourses in a constantly ongoing, enlightened conversation, even if a coordinative approach is legal.