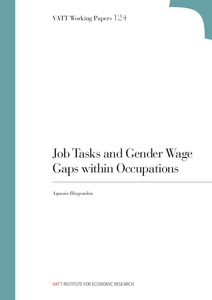 I provide evidence that task use at work by men and women in the same occupations is significantly different. The observed difference can account for the within-occupational gender-wage gap that is prevalent in many developed countries. Using data for thirteen European countries, I find that women consistently report spending less time than men on specific job tasks. The effect is exacerbated with fertility and selection into the labour force, however neither mechanism can completely account for the observed differences. The difference is also not accounted for by the type of occupations in which women are employed, nor their working hours and it is not driven by measurement error. Similarly to studies for the US and Australia, I find that a large portion of the gender wage-gap is found among individuals employed in the same occupational titles. However, controlling for both occupations and task use in an wage equation accounts for the entirety of the within-occupational gender wage-gap, for all countries in the sample.