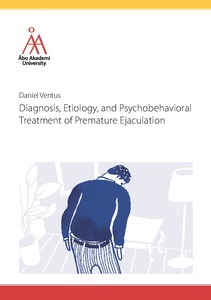 Ventus, Daniel
Åbo Akademi University
This publication is copyrighted. You may download, display and print it for Your own personal use. Commercial use is prohibited.
Näytä kaikki kuvailutiedot
Julkaisun pysyvä osoite on
http://urn.fi/URN:ISBN:978-952-12-3862-8

Premature ejaculation (PE) is characterized by a pattern of involuntary ejaculation prior to, upon, or shortly after penetration leading to personal or interpersonal distress. Some definitions add a time limit of about 1 minute following penetration. Around 25% of the male population report ejaculating before they wish to do so, while about 4% are estimated to meet current diagnostic criteria. PE has been associated with anxiety, depression, low selfesteem, sexual distress, interpersonal difficulties and a decreased quality of life. Little is known of what causes PE. Many possible etiological factors have been explored, however, none have as of yet been replicated and confirmed in large scale studies. The first-line treatment for PE today is pharmacological, namely using selective serotonin-reuptake inhibitors, sometimes combined with sexological therapy.
Study I aimed at clarifying the temporal stability of PE symptoms. Two longitudinal samples were used: a population-based sample followed six years, and a sample of patients previously diagnosed with PE, who were untreated at the time of the study, followed three years. In the population-based sample, less than half of those who reported ejaculation latency times (ELT) of less than 1 minute at the first data collection also reported it six years later. In this sample, 47% reported having experienced a change in ELT between the two measurement points. In the clinical sample, only 5 out of 16 men reported ELTs of less than 1 minute at both time points. In the clinical sample, 63% reported having experienced a change in ELT between the two measurement points.
Study II aimed at clarifying the direction of causality between PE symptoms on the one hand, and anxiety, depression, and sexual distress on the other. In a longitudinal, population-based sample followed six years, bivariate analyses revealed that PE and sexual distress were mutually positively correlated acorss time. Also across time, PE was positively correlated with future anxiety, and depression was positively correlated with future PE. Correlation coefficients were small to moderate. However, when fitting structural equation models to the data, no associations were found across time between PE and the other variables.
Study III explored associations between PE and the lifestyle factors alcohol use, physical exercise, and body-mass index. Cross-sectional population-based and clinical samples were used. The most consistent finding was a negative association between PE and physical exercise. While the effect size was small, the negative association was robust, since it was observed when comparing the clinical sample to both the whole population-based sample and to an agematched subsample, as well as within samples and in multivariate analyses of all study variables.
Study IV aimed at developing more effective psychobehavioral treatment protocols for PE. Fifty PE patients were randomized into three groups: 1) a treatment regime consisting of vibrator-assisted start-stop exercises 2) vibrator-assisted start-stop exercises, and additional psychoeducation and exercises aimed to improve the patient’s awareness and utilization of physiological cues related to sexual arousal, or 3) waiting-list control group. Both treatment groups improved with large effect sizes after treatment compared to the control group. The treatment groups did not differ on the PE outcome measure at any time. However, the second group also improved on most secondary outcome measures, including anxiety and sexual distress, indicating a favorable outcome for the group receiving additional intervention.
In conclusion, PE symptoms might not be quite as stable over time as previously thought. I suggest that the current cutoff for ELT for PE diagnosis at 1 minute is unnecessarily strict. Increasing the temporal criterion to approximately 2–4 minutes would reduce false negatives, while the criteria for distress and control reduce the risk of false positives. Furthermore, results from the present studies showed no indication that anxiety and depression would be major etiological factors in PE. Hence, these should probably not be targeted in most cases in attempts to improve PE. On the other hand, increased physical exercise may be a promising intervention for PE in some men, and should be further investigated in future studies. Vibrator-assisted start-stop exercises are supported by replicated evidence suggesting that they are viable treatment options for PE.