Victorian Voting: The Origins of Party Orientation and Class Alignment 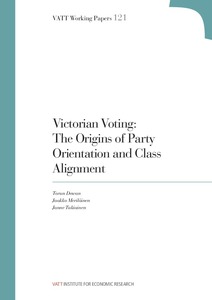 Much of what we know about the alignment of voters with parties comes from mass surveys of the electorate in the postwar period or from aggregate electoral data. Using individual elector level panel data from 19th-century United Kingdom poll books, we reassess the development of a party-centred electorate. We show that (i) the electorate was party-centred by the time of the extension of the franchise in 1867; (ii) a decline in candidate-centred voting is largely attributable to changes in the behaviour of the working class; and (iii) the enfranchised working class aligned with the Liberal left. This early alignment of the working class with the left cannot entirely be explained by a decrease in vote buying. The evidence suggests instead that the alignment was based on the programmatic appeal of the Liberals. We argue that these facts can plausibly explain the subsequent development of the party system.