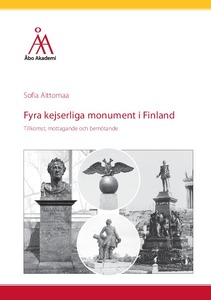 This study (Four imperial monuments in Finland. Origin, reception and treatment) examines the entire life span of four imperial monuments in Finland: the colossal bust of Alexander I (1814), which has been located in various places in Turku and in Helsinki, the Stone of the Empress (1835) at the Market square in Helsinki, the monument of Alexander II (1894) on the Senate square in Helsinki and the monument of Peter the Great (1910) in Vyborg. All monuments originate from the so called “Imperial period” of Finnish history (1809–1917), when the Grand Duchy of Finland was part of the Russian Empire and the Russian emperor was the Grand Duke of Finland.
In the present thesis, the symbolic function of the monuments is examined in relation to the changing historical and political contexts. The purpose of the thesis is to reconstruct the history of the monuments, describe their design, placing and meanings during different times and political cycles. At the same time, various aspects of power connected to the monuments and their history are highlighted. By studying documents related to the monuments, their whole life span and changes in meaning is reconstructed and accounted for.
The study is based on an extensive empirical basic research, based mainly on archive material and supplemented by studies on contemporary day and week press. The thesis substudies are case studies, which focus on one (article I and II) or two (article III) individual monument projects. As a whole, the survey can be regarded as a case study of imperial monuments in Finland.
The result shows that there is a strong connection between, on the one hand, the monuments creation process, their message and reception and, on the other hand, their direct destruction/attempted destruction or status degradation. The reconstruction of the monuments history shows that their symbolic functions changed with the changing political conditions. The clearest change is the transition from Grand Duchy to Republic, but shifts of significance were already made during the time of the Grand Duchy. During their history, the monuments have repeatedly been reactualized and as the reconstructions of their history show, this has often happened in politically tense situations. The monuments were often reactualized in connection with other monument projects. In the thesis, examples are given that the new monument projects led to discussions about the existence, justification and placement of the imperial monuments. New national monument projects and existing imperial monuments often competed for one and the same place.