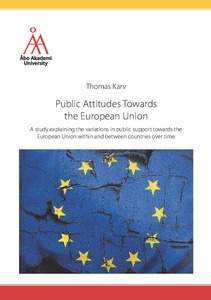 Karv, Thomas
Åbo Akademis förlag - Åbo Akademi University Press
This publication is copyrighted. You may download, display and print it for Your own personal use. Commercial use is prohibited.
Näytä kaikki kuvailutiedot
Julkaisun pysyvä osoite on
http://urn.fi/URN:ISBN:978-951-765-935-2

Public attitudes towards the European Union (EU) have become increasingly important over time. This especially since the process of European integration has become widely considered as a political process affected by attitudinal fluctuations. Higher levels of public support contribute to the democratic legitimisation of the EU, as the European public should be considered as the only source of democratic legitimacy. The EU as an object should not, however, be empirically approached as a singular entity, hence guidelines from system support theory are used to approach the EU as a multidimensional political object divided into separate system important elements, towards which public attitudes are directed. This approach considers the common understanding that the European public differs in their evaluations of the different elements of the EU. Despite the vast amount of literature that has focused on individual-level determinants of EU attitudes, there is still a lack of macro-level studies including both a longitudinal and cross-sectional perspective. The research problem that this study seeks to answer, therefore, centres on explaining the varied levels of public support for the EU within the EU area. This study identifies the underlying national contextual-level determinants for the variations in public support for the EU within and between countries over time.
The research problem is approached by deploying both descriptive and statistical analyses. Survey data provided by Eurobarometer is used to measure country levels of public support, while Eurostat provides the main part of the national contextual-level factors used to explain country-level variations. In this study, the effects on public support from several different types of contextual-level factors are accounted for, including economic performance, democratic culture, external pressure and the EU-relation of the 28 member states. Eight different system elements of the EU were also identified as being of importance for the system persistence capabilities of the EU, divided into three main system components. Hence, this study analyses the determinants of public support for European integration policies, the EU regime and the European political community. Furthermore, this study shows that the within countries variations in public support are predicted, to a large extent, by the economic performance of countries, while the variations between countries are more related to cultural and demographic differences across the EU area.
Public attitudes towards the EU vary extensively both within countries as well as across the EU area. Connecting country levels of public support to national level circumstances confirms the argument that public attitudes towards the EU are formed within the national level contexts. Therefore, what the European public thinks about the EU does not appear to be directly related to what the EU is actually doing. The understanding that the country levels of public support are prone to fluctuation over time, based on national circumstances, contributes to an unstable foundation for the future of European integration. As the EU has been considered to have been in an almost constant state of crisis since the start of the global recession in 2008, this should be regarding as a worrying sign for the future system persistence capabilities of the EU.